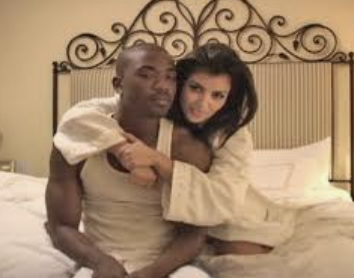 A blast from the past! Could there be a part two of the famous Kim K and Ray J sex tape! After 20 years this tape his still hunting Kim. The Kardashian’s/ Jenner family aired their new series Keeping up with the Kardashian’s Wednesday on Hulu. The family is back in front of the camera!

As always nothing is left untouched! Unfortunately Kim’s son Saint was play a very popular game call Roblox. You create a character and create a life. You can drive, change clothes, buy homes, interact with other players etc. Sounds cool right? During their first episode Saint West was playing that game and showed Kim her “character”. Kim’s crying face was on one of the Roblox account pretending to be Kim. To make matter worse there was a link insinuating if you’d click it you would see part two of the Tape that made their family famous!

Kim was pissed! She said shell do whatever it takes to keep that video private! According to Kim she’s “99.99% sure there is no second tape”. During the show she even called Kayne West whom she is in the process of divorcing. She called him crying and very upset! If you remember Kim and Ray J were a couple and made a sex tape. The tape was leaked and boom the start of the legacy began.

During my investing I learned Wack 100 was behind the threats. Its unclear of he or someone in his camp created that Roblox character. We do know he’s behind the threat of leaking the 2nd tape. During a recent interview Wack said there is a part two and he has the copy. He claims he has the “rights” to the video and will release it. If you don’t know Wack 100 is Ray J former manger. And he’s probably the person who leaked the original tape! ( we cant confirm or deny that allegation)

During the show Kim stated she has the money, lawyers, resources and time to burn anyone who thinks this tape will be released again! Not only that Kim is studying the bar so I’m sire she knows her rights. Do you think the tape will leak? Do you think its fair that her past is a dark cloud she cant shake? As of now the account has been removed. Kims team is still fighting for the alleged tape to NOT be released.

Kim just wants to put that part of life behind her. Sh wants to protect her children from EVER that video. During the show she said she was happy Saint cant read yet…..