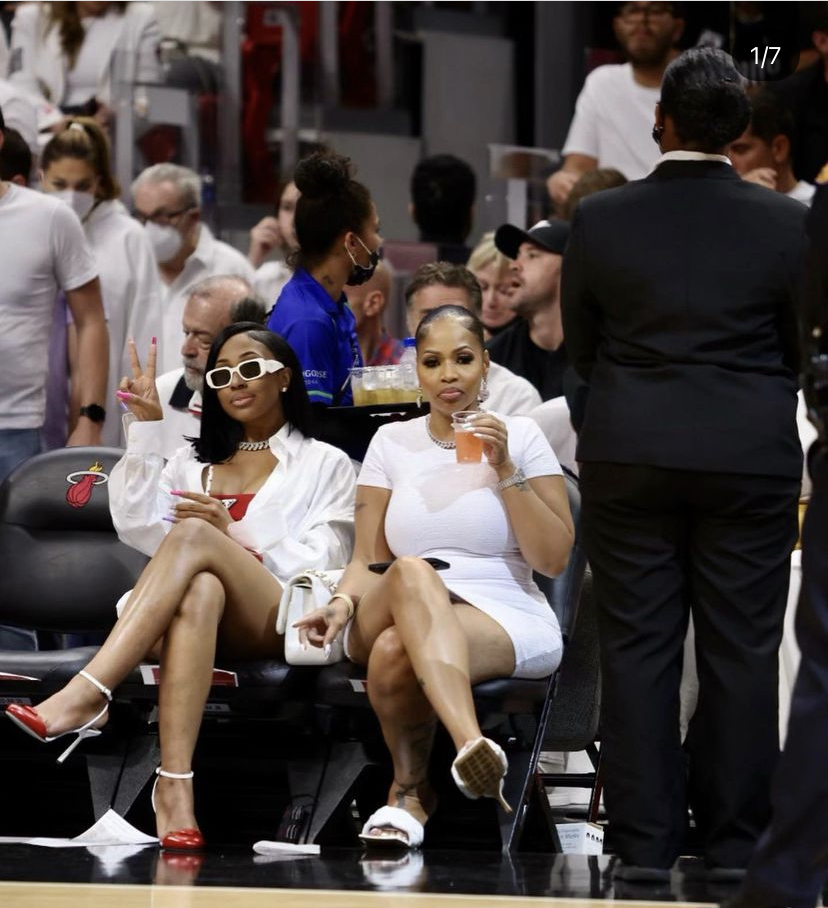 Yung Miami and her fine ass mom Keenya Young was sitting court side at last night’s Miami Heat’s game. Miami mothers looks like her sister. She looks so young and beautiful. Shes glowing! Keenya has been living life since her release.

Keenya Young was released from jail in 2021. According to a old news report.

“Yung Miami’s mother, Keenya Young, was charged with first-degree murder for the death of Emily Robinson while trying to flee the scene after an armed robbery. Young shoplifted and then drove away in a car that crashed into another car, causing the accidental death of Emily Robinson. Young received a sentence of five years plus 10 years probation.” Ever since Keenya was released shes been spending time with family and enjoying her life.

Keenya and Miami are very close. Shes a wonderful grandmother and supports Miami in everything she does! Last night Keenya was dressed in all white dress, and a beautiful all white Channel Bag amd white peek a boo heels.

Yung Miami wore an all white dress with a splash of a red Prada shirt and matching Shoes! A glitter lip bag and white Prada shades. Miami always steps out looking Top Notch! When your dating a major Music Mogul (Diddy) its only right you stay fine ass fuck at all times! They also ran into Dj Khaled at the game.

Big Caresha Not The Little one! Many blessings and memories to you and your family. Y’all deserve it for all the hard times! Miami tweeted in 2021 before her mom came home, how she was left with her siblings and her first born Jai to raise. They were her motivation for her career as an artist. So many people were depending on her. Miami is so strong! Holding down her family and group while Jt was gone. Put some respect on her name, period. When the pressure come sis don’t fold and i respect that.