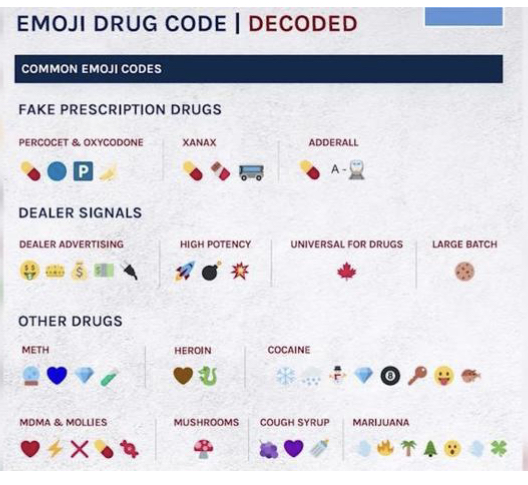 DEA says they cracked the code emoji language for how do you purchasing drugs. Be careful texting the weed man y’all … But for real

CLEVELAND (WJW) – They look innocent enough, but the U.S. Drug Enforcement Administration (DEA) is warning the public about a secret emoji code being used by drug dealers and teenagers.

The DEA released a decoder reference guide for parents, caregivers and educators to not only inform them, but potentially save lives.

“The Drug Enforcement Administration is aware of drug trafficking organizations using emojis to buy and sell counterfeit pills and other illicit drugs on social media and through e-commerce,” a document accompanying the guide said.

Among the “decoded” symbols are a snowflake emoji for cocaine, a diamond emoji for meth, and a maple leaf, which the agency said is “universal for drugs.” Human skeletal remains found in Springfield Township

“Emojis, on their own, should not be indicative of illegal activity, but coupled with a change in behavior, change in appearance, or significant loss/increase in income should be a reason to start an important conversation,” the document said.