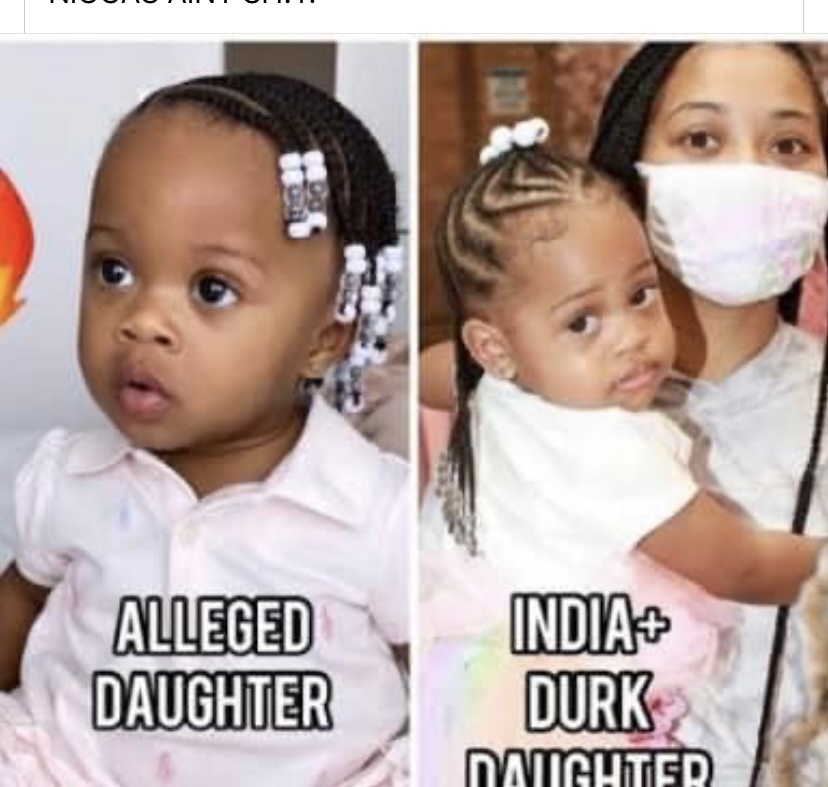 Honey the Internet is in a frenzy! Durk allegedly had a baby on India! The most loved hood Romance is going through a messy break up! So if you havent already learned, the other day India took to social media to announce she was a “free agent” and unfollowed Fiancé Lil Durk on Instagram.

And went on a lunch date by herself. Now thes unusual for her she been omitted at her self. Now that doesn’t prove she’s single but after Lil Durk clapped back fans knew there’s trouble in paradise.

The internet didn’t waste any time finding pictures of the Allergic baby mama and a ledge a baby! They even did a side by side comparison of the maybe baby and Willow! What yall think? I personally cant confirm nor deny until the DNA test is done! Both babies look like their mother to me. Check out the two girls below and tell me what you think…

The alleged baby mama is pictured below….As well as Lil Durks clap back towards India.

According to him India ain’t going nowhere no time soon baby or no baby! The nerve of this man! Why do men expect women to stay after doing the unthinkable! What is wrong with him? He had everybody fooled, I guess being a romantic hood gentleman is a lie. Honey at this point all me cheat! Everyone had faith in you Lil Durk, you let everyone down. He got the ladys of the internet pissed off!

what’s yall thoughts? India did clap back and call cap! I guess she not playing. Durk might not able to come back from this.

The two were recently engaged he proposed at a concert in front of friends family and his fans he had the whole world fooled! Durk had 7 biological children plus so this maybe baby will be baby number eight. And a total of 9 if she decides to stay. She has one child from a previous relationship. I hope they figure it out! Im not saying stay with a cheater but damn man….