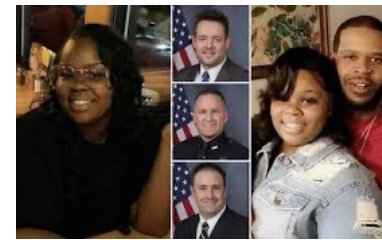 Today a Louisville a grand Jury convicted one of the three officers involved in the death of Breonna Taylor. Breonna Taylor was murder sleeping in her home on March 13, 2020. Officers enter her home without knocking and fired multiple shots in her home.

Kenneth Walker fired shots back at Louisville police not knowing it was the police. The police claim they had a no-knock warrant to enter their home. Kenneth was arrested that night. Louisville police department wanted to charge Kenneth with Breonna murder!
They offered Kenneth a plea deal that would turn his 10 year sentence into probation, if he testified that Breonna was apart of an “organized Crime syndicate”. He turned down the plea deal. He later filed a lawsuit which is still pending stating he acted in self defense.

Officer Brett Hankison was indicted on three counts of 1st degree Wanton Endangerment. Sgt. Jonathan Maltingly was NOT indicted. Detective Myles Cosgrove was NOT indicted either. A full press conference is being held now.
According to google

“A person is guilty of wanton endangerment in the first degree when, under circumstances manifesting extreme indifference to the value of human life, he wantonly engages in conduct which creates a substantial danger of death or serious physical injury to another person.”

The state of Louisville,Ky set up multiple barriers to block protesters yesterday in preparation of the grand jury’s decision. Protesters have started again after hearing the news. Although the officer was indicted no one was charged with her murder.
click the link to watch the press conference below…

prayers to Breonna Taylor’s family and Kenneth Walker as well. Even though the Taylor family won their 12 million dollar lawsuit against Louisville police department no amount of money can replace Breonna!