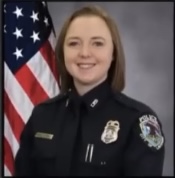 Megan Hall married police officer involved in the scandal with six other colleagues. According to reports Megan and five to seven other fellow officers engaged in sexual activity. Some sexual acts happened during work hours while officers should have been working. Group sex, wild party’s are some of the incidents that occurred.

So far, five officers have been fired and three more have been suspended without pay as officials in the Nashville suburb of La Vergne investigate the allegations against the 60-person police department, Mayor Jason Cole said.

“This situation is unacceptable and as soon as it was brought to our attention it was immediately investigated and action was taken upon the individuals involved,” Cole said in a statement. “Our top priority moving forward will include rebuilding the public’s trust.”

The accounts of La Vergne police officers were in an internal report about the department’s investigation obtained by NBC affiliate WSMV of Nashville. The officers spoke about sharing cellphone photos of their genitals, having sex in the police station on duty and taking part in “Girls Gone Wild”-type parties.

“The actions of a few do not represent the department as a whole,” Police Chief Burrel “Chip” Davis said.

To read more on the story click the link below…