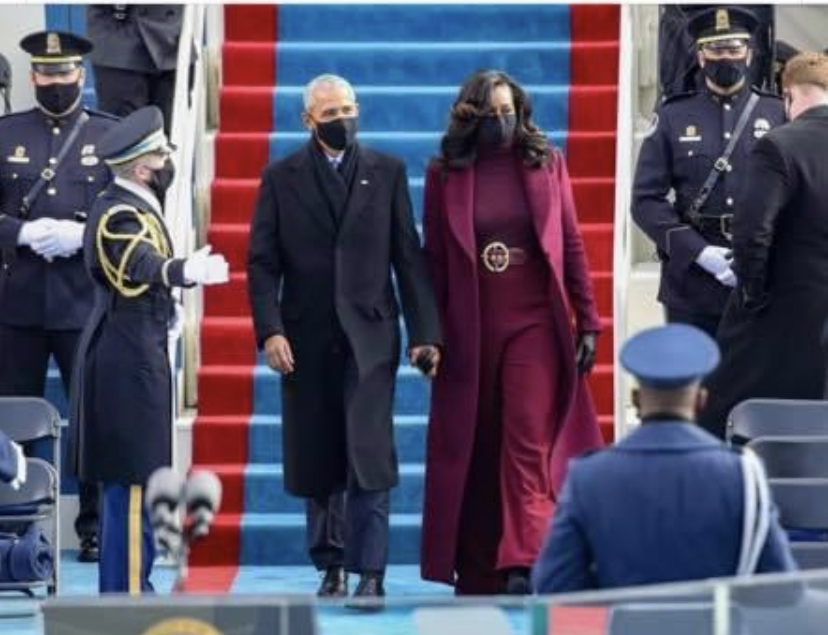 The former President Barack Obama and beautiful wife Michelle Obama stole the inauguration! Not literally but they two were so well dressed people couldn’t help but acknowledge their presence. That’s that melanin magic!

The Obama’s has always dressed with style and class. Michelle’s hair was slayed! Both looked great. This was one couple that represented the United States respectfully. Today wasn’t about them even though my whole social media time line was full of pictures of the beautiful couple.

Former President Trump decided NOT to attend the inauguration. Trump had a helicopter waiting at 8am. He had a farewell ceremony for himself at a separate location. Due to Trumps recent acts of igniting a civil war the government felt he didn’t deserve a presidential farewell.

Both Joe and Kamala were swore in and gave speech’s. They touch on rebuilding American. Reminding people about unity and speaking on rebuilding our country as a whole.

The two have not released or spoke on their black agenda even though throughout the election the media highlighted that Mrs. Harris was a “black” woman. Many people question if they even have a “black” agenda. Hopefully in due time they’ll share their agenda for the African American/black Community.

Congratulations again! Four years to make due on all the promises made during election.
Congratulations to Eugene Goodman who was promoted today! He’s the brave officer who escorted the mob of thugs that recently annihilated the capital. He used himself as a target to get them away from the room the senators were in.