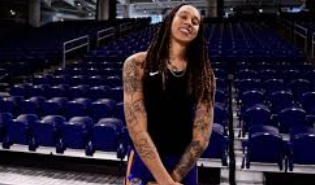 CNN released a report this morning (after seeing my article) about Brittney Griner. Russia’s government made a statement regarding her arrest. According to CNN report states:

“Moscow court announced it has extended the arrest of American basketball star Brittney Griner until May 19, according to Russian state news agency TASS.

“The court granted the request of the investigation and extended the period of detention of the US citizen Griner until May 19,” the court said, per TASS.

According to Russian authorities, the two-time Olympic gold medalist was arrested on allegations of drug smuggling significant amounts of narcotic substance at a Moscow airport. US Representative Colin Allred, a congressman from Texas, said she was arrested on February 17.

Family, friends and fans want to know where Brittney is! Here what we know so far about her arrest…. According to BBC.com’s report

“Ms. Griner, 31, is believed to have been arrested by Russian authorities on drug charges.

A month after her detention, little is known about her circumstances.

The uncertainty around her fate has fuelled an outpouring of support for the player, who is considered by fans and sports analysts alike to be perhaps the greatest female basketball player of all time.”

In one of the last public sightings of Brittney Griner, captured on CCTV, the American professional basketball player is seen walking through airport security trailing a small, black suitcase.

Ms Griner, a star centre for the Phoenix Mercury, had landed at the Sheremetyevo airport, outside Moscow, there to play another season with a Russian league.

Ms Griner had a second job, and that was why she had flown to Russia – to play for EuroLeague team UMMC Ekaterinburg, where she had worked since 2014 during the US off-season.

Roughly half of WNBA players compete overseas in the off-season. For most, it’s a way to augment their domestic income: WNBA players receive roughly five times more in Russia than they do in the US.

“If she were Steph Curry or LeBron James, she wouldn’t be over there at all because she’d be making enough money,” Ms Spruill said.

Following Russia’s invasion of Ukraine on 24 February, the EuroLeague suspended all Russian teams and US and WNBA officials began calling players out of the country.

But it was too late for Brittney Griner, who is believed to have entered Russia one week earlier, on 17 February, though the timing remains unclear.

The Russian Federal Customs Service said in a press release that a sniffer dog had led authorities to search the carry-on luggage of an American basketball player and that it had found vape cartridges containing hashish oil. A state-owned Russian news agency, Tass, identified the player as Ms Griner.

Russian authorities only confirmed her detention the third week of March, though they disclosed she was stopped at the airport in February. Where she is being held, and under what circumstances, is not publicly known.

Prayers to Brittney’s family, friends and fans. I pray for ber safe return!