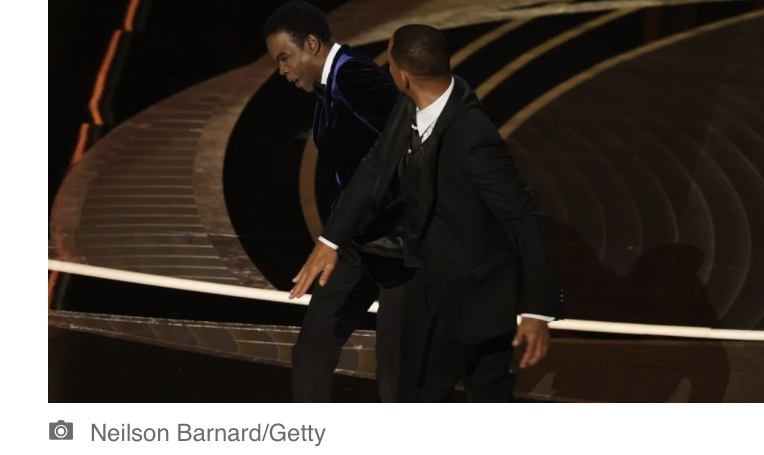 Fans at home are confused after Will Smith slaps Chris Rock on stage for making a joke about his wife Jada Pinkett Smith’s lack of hair.

Fans were shocked to see Will slap him. Chris Rock seemed genuinely surprised when Smith stormed the stage and slapped him in the face. Their extended exchange was bleeped by ABC but it was fairly easy to read Smith’s lips when he shouted, “Keep my wife’s name out of your FUCKING mouth!”

In an uncensored version posted to Twitter, Rock said, “Will Smith just smacked the shit out of me.”

“Wow, dude, it was a G.I. Jane joke,” the comic added before Smith repeated his deadly serious plea: “Keep my wife’s name out of your fucking mouth!”

I’m going to,” a visibly unnerved Rock said, shaking his head. He seemed like he wanted to say something back, but ultimately decided to move on and announce the nominees for Best Documentary. Last December, Pinkett Smith opened up about her struggles with alopecia, revealing that she had decided to shave her head instead of constantly dealing with hair-loss issues. “Mama’s gonna have to take it down to the scalp so nobody thinks she got brain surgery or something,” she posted on Instagram at the time. “Me and this alopecia are going to be friends … period!”

Fans are talking online trying to decide if this was staged or not. What do you think?

Will Smith even won Best Actor this evening! After the slap of course. Do think Will was wrong? You can tell in other clips how uncomfortable the joke made Jada feel. The look of embressment on her face. Will had the right to stand up for his wife.